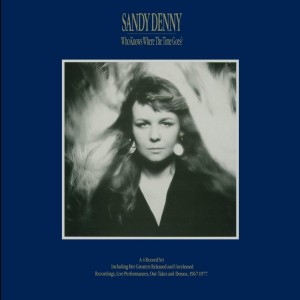 Compiled and produced by Trevor Lucas and Joe Boyd.

This posthumous boxset collected together all sorts of material recorded by Sandy during her career. It included album versions, demos of previously released and unreleased songs, and live versions of tracks which had never been released or not heard since their original broadcast on the BBC. A couple of tracks listed as album versions were infact slightly different: Blackwaterside has Sandy’s acoustic guitar introduction, whereas the album version fades in. Also ‘For Shame of Doing Wrong’ was a slightly different mix to the version issued on Rendezvous.

The Island 4 LP set was packaged in a blue box that also contained a 20 page LP sized booklet with photos, track information and lyrics for most of the songs. The Hannibal 3 CD set was at first packaged in a green LP sized box and a booklet nearly identical to the one in the 4 LP set; the main difference is an additional introduction by Joe Boyd.

Later CD sets were packaged in a large jewel case with the same catalogue number and their booklet correctly identified ‘Late November’ as an alternate version instead of the El Pea version as claimed in the earlier releases.

All songs written by Sandy Denny except where noted.
Disc 1 – Side A