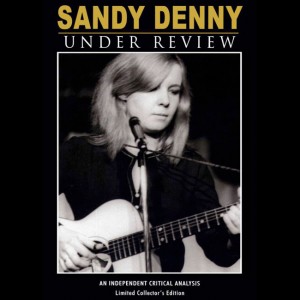 Sandy Denny – Under Review is a documentary film reviewing Sandy’s music and career. The cover text describes her as arguably Britain’s finest ever female vocalist and songwriter, and continues: “Although Sandy Denny is revered deeply amongst fans of folk music and the’singer-songwriter’ genre, she has never received the universal acclaim so long overdue and so often heaped on those of far lesser talent. This program attempts to redress this imbalance and reveal why she remains such an inspiration to so many.”

The DVD contains extracts of these tracks primarily from the original albums, but also radio and TV programmes including brief video extracts from live performances: