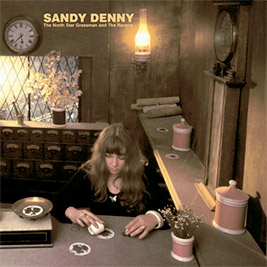 Two original compositions from the aborted Fotheringay 2 sessions, ‘Late November’ and ‘John the Gun’ were re-worked for the album and supplemented by a further six self penned songs and two cover versions, Bob Dylan’s ‘Down in the Flood’ and Brenda Lee’s ‘Lets Jump the Broomstick’.

The first songs recorded were the traditional ‘Blackwaterside’ and ‘Let’s Jump the Broomstick’ in March 1971 at Sound Techniques. Sessions continued the following month until the end of May at Island studios, where the album was completed with the cutting of the title track. A number of other songs were attempted and discarded during the course of the sessions including ‘Honky Tonk Women’, ‘Walking the Floor over You’ and the traditional ‘Lord Bateman’. (‘Walking the Floor over You’ was re-recorded during the Like an Old Fashioned Waltz album sessions, and the demo of ‘Lord Bateman’ was released on the Sandy Denny Boxset.)

Sessions had begun for the album with Andy Johns at the helm, but in the end the album was produced by Denny herself, current bandmate Richard Thompson and John Wood. It was John Wood who recommended the film-score arranger Harry Robinson to Denny, and he was brought in to add strings to ‘Next Time Around’ and ‘Wretched Wilbur’; Robinson would also go on to add string arrangements to Denny’s remaining solo albums.