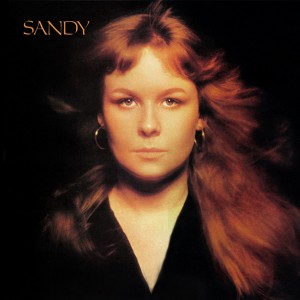 The Sandy LP was begun just a fortnight after her UK tour promoting her debut solo album The North Star Grassman and the Ravens ended in early November 1971.

The first song recorded for the album was ‘The Quiet Joys of Brotherhood’, a Richard Farina lyric Sandy had set to a traditional Irish melody ‘My Lagan Love’ her multi tracked vocal arrangement having been inspired by the Ensemble of the Bulgarian Republic. Demo sessions continued at the recently constructed Manor Studio in Oxfordshire, the first studio owned by Richard Branson’s Virgin label. The Manor sessions resulted in rough versions of ‘Sweet Rosemary’, ‘The Lady’, ‘The Music Weaver’, ‘Listen, Listen’, ‘For Nobody to Hear’ and ‘Bushes and Briars’. A further two tracks were begun but not finished: a cover version of fellow folk singer Anne Briggs’s ‘Go Your Own Way My Love’ and another Denny original ‘After Halloween’ which was reworked three years later for Fairport Convention’s Rising for the Moon album. A demo version from Manor Studio was later issued on the Who Knows Where the Time Goes? boxset in 1985.

All of the albums songs were finished at Sound Techniques and Island Studios in about 5 sessions between the end of April and late May where string arrangements by Harry Robinson were also added. Two further Denny compositions were recorded ‘It Suits Me Well’ and ‘It’ll Take a Long Time’ and a cover version; (the by now ubiquitous Bob Dylan cover) of ‘Tomorrow Is a Long Time’ completed the LP. (Sandy had performed Dylan covers on all her Island records releases with Fairport Convention, Fotheringay and on her solo debut The North Star Grassman and the Ravens. Allen Toussaint’s brass arrangement on ‘For Nobody to Hear’ was recorded at his Sea-Saint studio in New Orleans.

The album was originally issued in a gatefold sleeve featuring on its cover a photograph by David Bailey, that came to define Sandy’s public image. The gatefold of the Lp opened to show the song lyrics handwritten by Sandy herself and bordered by garlands of flowers drawn by Trevor Lucas’s sister the illustrator Marion Appelton. The back cover featured the tracklisting and credits.

Radio One DJ Tony Blackburn picked the albums lead single Listen, Listen as his single of the week in September 1972.