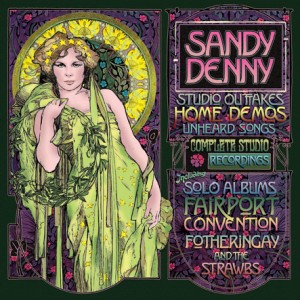 This set includes the legendarily long lost ‘Lord Bateman’ and is lavishly packed with all-new artwork. It comes with a 72-page 11″ square hardback book containing over 100 rare and mostly unseen photographs, a facsimile of one of Sandy’s notebooks with handwritten lyrics and other fascinating memorabilia. Each CD is housed in an individual gatefold digipak sleeve. The box also contains a reproductions of a beautiful original Island press pack, an exceptionally rare A3 promo colour poster for The North Star Grassman and the Ravens, a set of postcards, and the receipt for the purchase of her first piano.