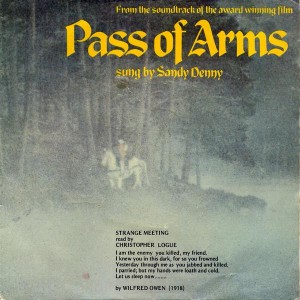 This 7″ single was the soundtrack to the award winning short film Pass of Arms (written, produced and directed by Peter Elford). The soundtrack was written by Don Fraser and featured two songs performed by Sandy and a recitation by Christopher Logue of the poem ‘Strange Meeting’ by Wilfred Owen. Both of Sandy’s tracks are now available on the 2 CD Sandy Denny anthology No More Sad Refrains and on the 2005 CD reissue of Sandy.

The reverse sleeve states: “Pass of Arms: In chivalry, a place which the ancient knights undertook to defend, e.g. a bridge, road, or ford etc, which was not to be passed without fighting the person who kept it. [Oxford English Dictionary]”