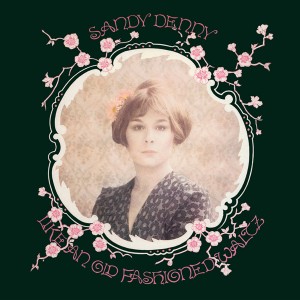 Like an Old Fashioned Waltz is the third solo album by Sandy released in June 1974. The album marked her first release that contained none of the folk influences seen on her recordings thus far and for this reason it divided her fans into those that preferred the traditional elements of her earlier work and those that followed her development as a singer songwriter.

Work began on the album whilst Sandy was still promoting her previous LP Sandy. The first track recorded was ‘No End’ at Walthamstow Assembly Hall on 3rd December 1972 in a solo version accompanying herself on the piano (this version was subsequently discarded in favour of a new recording with a band and strings). Sandy embarked on a month long tour of the US in April 1973 stopping off at the famous studios at A&M Records to record four songs; ‘Friends’, ‘Solo’, ‘At the End of the Day’ and the new version of ‘No End’ prior to a week long residency at the Troubadour, Los Angeles. A fifth song ‘What Is True’ was also begun at these sessions, but was left incomplete. It was later recorded for the Fairport Convention Rising for the Moon album the following year. After a tour of Europe throughout June and July, sessions for the album resumed at Sound Techniques in London in August where the remaining tracks were recorded; ‘Carnival’, ‘Like an Old Fashioned Waltz’, ‘Dark the Night’ and the two jazz standards ‘Whispering Grass’ and ‘Until the Real Thing Comes Along’.

The album was originally issued in an embossed gatefold sleeve styled in the colours described in the albums title track (primrose yellow and velvet green) and designed to look like an antique plate, with a floral motif drawn by Sandy herself. The cover photograph by Gered Mankowitz depicts Sandy in an old style image in the Edwardian taste that she admired. Once again the lyrics were reproduced in the gatefold. A single of Whispering Grass/Friends was released in a sepia picture sleeve in the style of the album cover in October 1973, the album was to be released shortly afterwards, but was delayed until June 1974 due to a vinyl shortage, by which time Sandy had rejoined Fairport Convention.