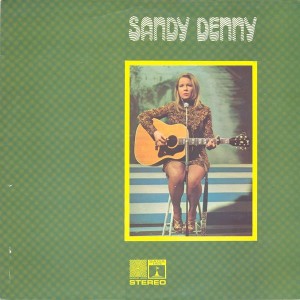 The album sleeve and spine only bear Sandy’s name, however the name on the record label is It’s Sandy Denny.

The album is a compilation of the songs that featured Sandy on lead vocals from the sessions for the SAGA LP’s Alex Campbell and His Friends and Sandy and Johnny. However, ‘The 3:10 to Yuma’, ‘Pretty Polly’, ‘Milk and Honey’, ‘The Last Thing on My Mind’, and ‘Make Me a Pallet on Your Floor’ are alternate recordings that were published on this LP for the first time (and later in 2005 on the CD Where the Time Goes). Allegedly Sandy felt the original SAGA recordings were too rough around the edges, so she re-recorded the tracks using exactly the same arrangements as the original versions. All the re-recorded tracks are musically and vocally superior interpretations.