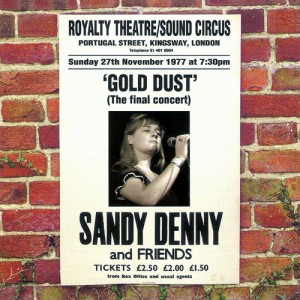 Due to technical problems on the guitar and backing vocal tracks, most songs’ (except for tracks 7 & 13) guitars were re-recorded by Jerry Donahue and backing vocals were sung by Simon Nicol and Chris Leslie. Faults and deterioration on a number of tracks are noticeable on the original master reels, and it is clear that in the interests of continuity the decision was made to re-record most of the guitars, thereby preserving the feel of a live band with the same player on guitar. Overall the concert benefits from the re-recorded guitar parts and from being properly mixed. Rough ‘soundboard’ type mixdowns of a selection of tracks from this concert surfaced on two releases prior to the Island Records CD issue:

The Attic Tracks Volume 3 / First and Last Tracks (A cassette release by Australian Friends of Fairport, which contained: ‘Solo’, ‘North Star’, ‘Gold Dust’, ‘The Sea’, ‘Tomorrow Is a Long Time’, ‘Stranger to Himself’, ‘One More Chance’ and ‘Who Knows Where the Time Goes?’)

Sandy Denny, Trevor Lucas and Friends: The Attic Tracks 1972-1984 (A CD release of many of the best recordings from The Attic Tracks cassette releases, including three tracks from the Royalty concert: ‘Gold Dust’, ‘Stranger to Himself’ and ‘Who Knows Where the Time Goes?’)

The running order of the concert was changed for the Island release, and due to the running time restrictions of CDs, almost all Sandy’s chat had to be cut from the performance. The actual set list was performed as follows:

All songs written by Sandy Denny except where noted.