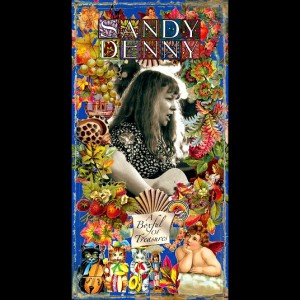 The 56 page full colour booklet has a foreword by Richard Thompson (which was the original foreward to Pamela Murray Winter’s unpublished Sandy Denny biography), a biographical essay by Jim Irvin adapted from his article in MOJO June 1998, and brief quotes including favourite tracks from many of Sandy’s friends, colleagues and admirers. The box also contains rare and previously unpublished photographs, drawings and lyrics from Sandy’s notebooks.