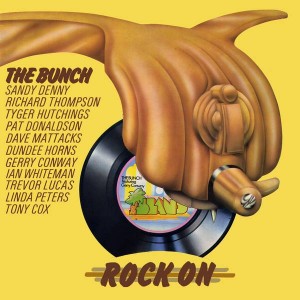 The Bunch was an ad hoc collection of “Fairport family” members gathered together to record a cover album of rock’n’roll songs. It was one of the first albums recorded at the newly-opened Manor Studios in Oxforsdshire run by Richard Branson. This LP also marked Trevor Lucas’ debut as a record producer.

The original run of the UK LP came with a flexi single inserted in the cover with the bonus track ‘Let There Be Drums’ (Island WI 4002).

Sandy was listed in the LP sleeve as being “Britain’s first lady of song, if you don’t count Dorothy Squires”.