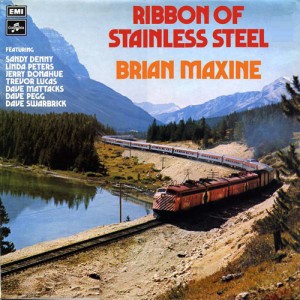 Ribbon of Stainless Steel is British Wrestling Champion Brian Maxine’s release as a singer. Released in 1974, he is backed by the then Fairport lineup including Sandy on backing vocals. Most of the album consists of country music covers, but there is also a version of Dave Swarbrick and Trevor Lucas’s ‘Pleasure and Pain’.