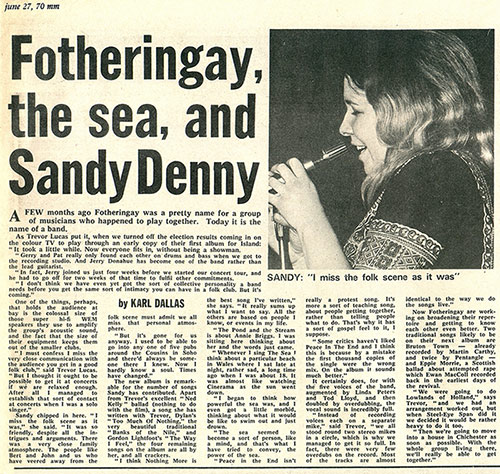 A few months ago Fotheringay was a pretty name for a group of musicians who happened to play together. Today it is the name of a band.

As Trevor Lucas put it, when we turned off the election results coming in on the colour TV to play through an early copy of their first album for Island: “It took a little while. Now everyone fits in, without being a showman.

“Gerry and I’ve really only found each other on drums and bass when we get to the recording studio. And Jerry Donahue has become one of the band rather than the lead guitarist.

“In fact, Jerry joined us just four weeks before we started our concert tour, and he had to go off for two weeks of that time to fulfill other commitments.

“I don’t think we have even yet got the sort of collective personality a band needs before you get the same sort of intimacy you can have in a folk club. But it’s coming.”

One of the things, perhaps, that holds the audience at bay is the colossal size of those super hi-fi WEM speakers they use to amplify the group’s acoustic sound, and the fact that the size of their equipment keeps them out of the smaller clubs.

“I must confess I miss the very close communication with the audience you get in a good folk club,” said Trevor Lucas. “But I thought it ought to be possible to get it at concerts if we are relaxed enough. After all I managed to establish that sort of contact at concerts when I was a solo singer.”

Sandy chipped in here. “I miss the folk scene as it was,” she said. “It was so friendly, despite all the intrigues and arguments. There was a very close family atmosphere. The people like Bert and John and us who have veered away from the folk scene must admit we all miss that personal atmosphere.

“But it’s gone for us anyway. I used to be able to go into any one of five pubs around the Cousins in Soho and there’d always be someone there I know. Now I hardly know a soul. Times have changed.”

The new album is remarkable for the number of songs Sandy has contributed. Apart from Trevor’s excellent Ned Kelly ballad (nothing to do with the film), a song she has written with Trevor, Dylan’s Too Much of Nothing, the very beautiful traditional Banks of the Nile, and Gordon Lightfool’s The Way I Feel, the four remaining songs on the album are all by her, and all crackers.

“I think Nothing More is the best song I’ve written,” she says. “It really sums up what I want to say. All the others are based on people I know, or events in my life.

“The Pond and the Stream is about Annie Briggs. I was sitting here thinking about her and the words just came.

“Whenever I sing The Sea I think about a particular beach in Wales where I sat late at night, rather sad, a long time ago when I was about 18. It was almost like watching Cinerama as the sun went down.

“I began to think how powerful the sea was, and I even got a little morbid, thinking about what it would be like to swim out and just drown.

“The sea seemed to become a sort of person, like a mind, and that’s what I have tried to convey, the power of the sea.

“Peace in the End isn’t really a protest song. It’s more a sort of teaching song, about people getting together, rather than telling people what to do. That’s why it has a sort of gospel feel to it, I suppose.

“Some critics haven’t liked Peace in the End and I think this is because by a mistake the first thousand copies of the single were the wrong mix. On the album it sounds much better.”

It certainly does, for with the five voices of the band, augmented by Linda Peters and Tod Lloyd, and then doubled by overdubbing, the vocal sound is incredibly full.

“lnstead of recording voices each on a separate mike,” said Trevor, “we all stood round two stereo mikes in a circle, which is why we managed to get it so full. In fact, there were very few overdubs on the record. Most of the tracks are almost identical to the way we do the songs live.”

Now Fotheringay are working on broadening their repertoire and getting to know each other even better. Two traditional songs likely to be on their next album are Bruton Town – already recorded by Martin Carthy, and twice by Pentangle – and Eppie Moray, a Scottish balled about attempted rape which Ewan MacColl recorded back in the earliest days or the revival.

“We were going to do Lowlands of Holland,” says Trevor, “and we had an arrangement worked out, but when Steel-Eye Span did it we decided it would be rather heavy to do it too.

“Then we’re going to move into a house in Chichester as soon as possible. With the whole group living there, we’ll really be able to get together.”